In my practice over the past several years, there has been a growing and troubling source of denials. Put simply, an alarming number of claimants are filing taxes for “self-employment” and receiving refunds under the Earned Income Tax Credit. This in itself is not disturbing. The alarming part is that in large numbers, the self-employed earnings never existed. This means that large numbers of people are filing returns that are fraudulent.

The Earned Income Tax Credit was designed as a reform to help individuals in lieu of welfare. It allows for receipt of tax credits (cash payments) for low income individuals whose earnings still leave them close to the poverty line. Good intentions aside, the main problem with these benefits is that it has caused a reliance on tax preparers to assist in filing returns to receive these benefits.

I don’t hold myself out as a tax or accounting expert. However, from my perspective the source of these fraudulent returns is almost invariably a “tax preparer.” I note that these mistakes come from tax preparers and not certified public accountant. I cannot think of a single instance of the dozens that I have seen where a client has had an EITC problem and a CPA. did the return. 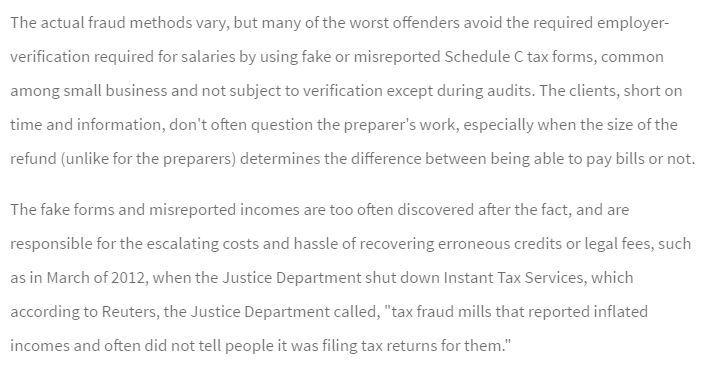 As an attorney for the disabled, this presents numerous difficult problems for me and my clients. First, attorneys only learn of their clients’ earnings history after the SSA runs an earnings report. This usually does not occur until the hearings level (ODAR). Additionally, our firm deals primarily with the ODARs in Memphis, Tupelo, Shreveport, Little Rock, Franklin and Nashville. Very often the ALJ’s in these jurisdictions don’t run new earnings reports until shortly before the hearing. I can think of one ALJ in the Memphis office that runs his reports literally ten minutes before his hearings start.

Obviously, this creates situations where I as an attorney have difficulty responding to a potential fatal issue to a case. Further, many times there is a completely valid explanation for the reported self-employed earnings. For example, I have had multiple clients over the years who have been the victims of identity theft. Similarly, others were unaware that a return had been filed on them at all. Commonly in these situations, the claimant thought she were letting a family member that was supporting her financially claim her as a dependent, only to discover that a tax preparer had filed a separate return on her.

Finally, if there is no valid explanation, then the case may still be salvaged provided the claimant files an amended return with the IRS to correct the inaccurate claim of self-employment. Failure to do this opens the claimant up to an impossible situation at hearing. She will be left with having to either admit under oath that her prior return is untrue (thus establishing elements of a tax fraud prosecution) or put her in a position where she could perjure herself under oath. Because of this ethical thicket, if my client is unwilling to correct the incorrect tax return, my firm will typically have to withdraw as counsel.